8 Types of Singing Voices: Discover Yours 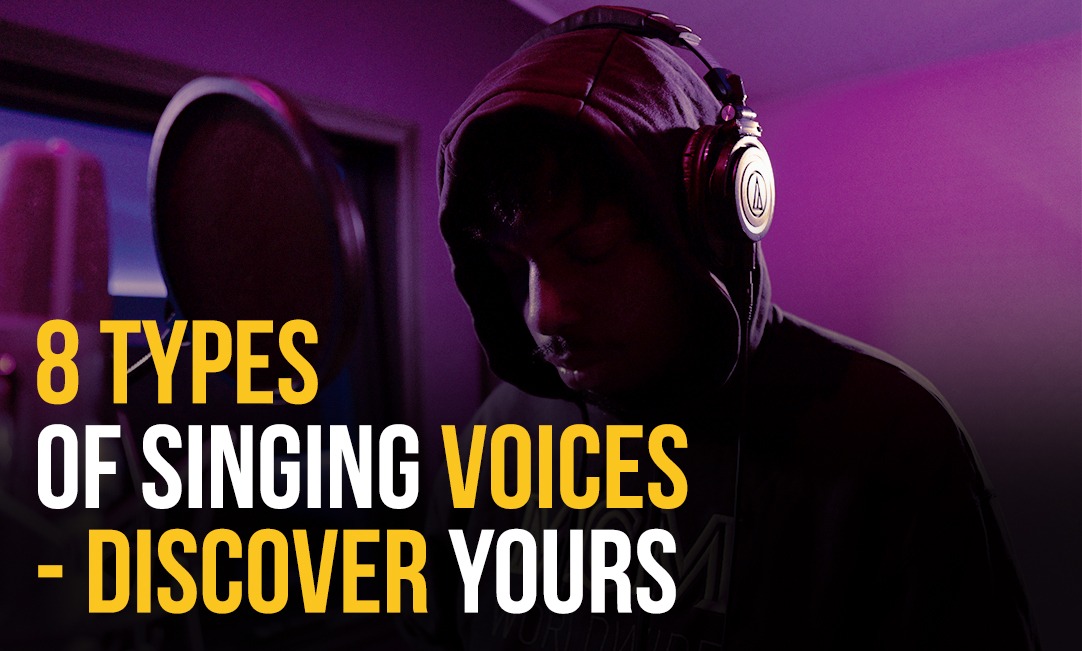 People frequently inquire about the various voice types when they work as voice teachers. Every singer desires to discern his or her voice type.

Usually, there are two whys and wherefores for this:

2) They'll know what to expect from their voice.

They love this question because people are always surprised to learn their true voice type. So, let's talk about the many types of voices in popular music and what you may expect from your instrument.

What are the voice types?

The classification of a singer's voice, also known as vocal type, is based on various factors such as their vocal range, vocal weight, tessitura, vocal tone, and bridge position.

So, what's the big deal?

Well, the voice type system was originally generated to make it easier for singers to be cast for protagonists in opera. In other words, if you know you have the range and tone of a Soprano, you would audition for the part and, ideally, get cast in it. Classic operas featured roles for sopranos, altos, tenors, and basses of all vocal types and ranges. Knowing your vocal type, on the other hand, might assist you to decide which artists to listen to and which songs to choose these days.

The 8 Voice Types in Singing

Bass vocals are the lowest male voice type, with low, rich rumble sounds and plenty of vocal weight, with a tessitura of roughly E2-E4 (two octaves). Real singer basses are hard to come by. The following are some well-known bass singers - Johnny Cash, Barry White, and Bing Crosby.

Baritones, which are common among men, can also sing in the tenor register if they extend their vocal range to higher notes. With a tessitura of A2-A4, the baritone voice possesses weight.

Among the most well-known baritone vocalists are:

Tenors, like baritones, are slightly lighter in vocal weight than baritones and have a tessitura of C3-C5. Because of the high notes they can hit, singers in this voice category might sometimes sound like a lady on the phone, and they're very popular in today's music.

The contralto is the lowest female singing voice type, and contralto vocalists are as rare as male bass singers. The female singers in the range have a tessitura of roughly E3-5 and a good deal of vocal weight. When they sing or speak in the lower registers, they can sound like guys. Popular contraltos include, for example - Annie Lennox, Nina Simone, and Lalah Hathaway.

With a tessitura of E3-E5, the final male kind, countertenor, is uncommon. It's the highest-pitched voice a man may have, and if you only heard a man sing in countertenor, you might mistake him for a woman. Because low notes are uncomfortable for these vocalists, you may anticipate them to sing high notes all the time. While there aren't many countertenors in pop music, here are some examples - Bruno Mars, Bowman, James Deller, and Alfred.

Alto singers have the second-lowest vocal range for females, with superb vocal weight and rich tessitura of F3-5. Many altos can extend their range to hit powerful high notes with practice. Some singers, on the other hand, performed entirely in the alto range. There have been a lot of great altos over the last 30 years.

Tracy Chapman, Lana Del Rey, and Amy Winehouse are some of the most well-known singers.

A mezzo-soprano singer is the female equal of a male baritone, and she is one of the most striking of all. They have a voice that is in the middle of the vocal types in their sex and can achieve higher notes with practice. Although mezzo-sopranos have a softer vocal weight than altos, they can add weight to top notes to give the lyrics more emotion. Their tessitura ranges from A3 to A5.

Singers that are well-known as mezzo-sopranos include - Madonna, Lady Gaga, and Bette Midler

The soprano has the largest weight for females, with a tessitura of C4-C6. Coloratura sopranos sing in a style known as 'coloratura soprano,' which includes dramatic runs, trills, huge jumps, and other virtuoso-like material. They don't need to be heavy to hit those high notes with force. Sopranos have more freedom in hitting various registers because they have less vocal weight.

When it comes to improving your singing abilities and choosing the perfect songs to perform, knowing your voice type, or the notes you feel comfortable singing, is crucial. You may learn how to determine your vocal range once you know your voice type and understand the most important aspects that go into it. With practice, you can broaden the range of notes you can reach and improve the overall sound of your voice.

Allow UNION Recording Studio  to assist you in achieving your vocal goals. Use our blogs as a starting point for your journey to becoming a professional singer.